Welcome to the State of the EPLWA, a weekly update that will be posted early in the week during the regular season. See previous editions here.

There was drama, a surge and seize mentality at the top, and plenty of goals as the Evergreen Premier League rocked Washington for a sixth week. 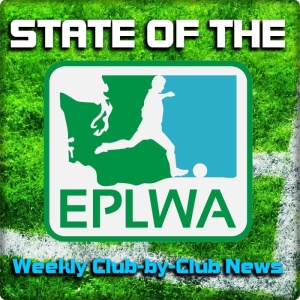 Last Friday Bellingham United led the EPLWA. Last Saturday Vancouver Victory took over the lead in EPLWA. On Sunday, South Sound FC jumped over both and stands atop the league table with 16 points. Meanwhile in the middle of the table rivals Spokane and Yakima both won to stay neck and neck with each other and within reach of making a run to go even higher.

This weekend’s five matches produced 20 goals. The scoring is entertaining but it is the club who has the best defense so far that leads the pack. South Sound FC has only allowed five goals over their six matches.

The league passed the 8,300 mark in total attendance, with the Spokane Shadow leading the way with nearly 600 per match.

The goalWA.net goalKING race is heating up. It now takes three goals to make the top ten. Hector Valdovinos scored twice last week for Yakima and sets the pace with seven.

The lone shutout of the weekend was notched by Spokane’s Keane Ellis.

Everyone has at least one win after Seattle got their first in Wenatchee.

The Hammers knew it would be a tall order to play back-to-back in Vancouver and South Sound. How it turned out is a genuine setback for the side. They are  4-3-1 and have dropped to third place after a 5-1 loss at Vancouver was followed by a 2-1 loss at South Sound. It’s Bellingham’s first losing “streak” in league play. The club is also now winless over three straight. The season schedule put the Hammers on the road most of the time in the early going. Now they will need to make up ground at home. High-scoring Yakima United come for a visit to Civic on Sunday June 8 at 3 PM in what promises to be an exciting encounter.

It was sweet music to the Seattle Stars when Rob Lasche scored two goals on Sunday night in Wenatchee. The soccer player-musician from Bellevue scored in the first half and then again in stoppage time as the Stars won their first league match. Earlier in the contest Scott Barnum stopped a Wenatchee penalty kick try. The Stars have played the fewest matches in the league (five), and it’s been a struggle to get the right line-up and momentum. Now that the first win is out of the way, Seattle is hopeful of adding to their tally when they visit Spokane June 7 and then scurry back across the state to play at WestSound (Silverdale) on June 8.

The Shock have played a series of home matches and earned results which have vaulted them into top spot in the EPLWA. The latest might have been the biggest, a 2-1 win over Bellingham United on Sunday June 1st. Now with a record of 5-0-1, South Sound is the only undefeated club in the league. They also have a game or two in hand over their closest competitors. It’s defense that leads the way for the Shock. They are giving up less than a goal per match, easily tops in the league. Now the Shock take a break from league play to return to the USASA U-23 Nationals. When they get back they will host WestSound FC on June 14 at 1 PM at Lincoln Bowl in Tacoma.

The Shadow scored their first home win in league play on Saturday and it’s likely the club now feels it has put its two opening losses at home behind them. Since then Spokane is unbeaten in four matches at 3-0-1. Nick Hamer got the decider against WestSound. He now has three on the season. Mike Ramos still leads the club with five. It was a second shutout for Shadow. This time Keane Ellis got the clean sheet. The Shadow lead the league in attendance with a 590 average. Spokane will visit the Seattle Stars on June 7th.

The Victory are 5-2 after they whipped Bellingham United 5-1 at McKenzie Stadium on Saturday afternoon May 31st. The win gave the club a glimpse of first place. They held it overnight until South Sound beat Bellingham on Sunday June 1st to jump over Vancouver. The Shock will visit the Victory on Sunday July 20 in a match certain to be circled on many calendars.
Vancouver continues to spread around their dynamic scoring (19 goals). Borce Atanisov returned from an illness to score twice against the Hammers. He now has three. Mizra Ramic scored and now has four goals.
The Victory will try for their sixth win when they visit Wenatchee on June 8th.

The Capitals moved their soccer show to Wenatchee Valley Community College for the rest of the season as no stadium fields are available. In the new, cozy setting the soccer is fast and fans are up-close to the action. Sunday night Wenatchee hosted the Seattle Stars. They didn’t like the final result and will likely feel they lost available points as a stoppage-time goal sent them to a 2-1 defeat. WUFC failed to convert a penalty kick in the first half. The team wore their yellow kits for a second straight time. Vancouver Victory come calling on June 8th. The Capitals will look to get back at them after they beat Wenatchee earlier 3-1.

The boys from Silverdale came back from a Spokane-Yakima road swing with memories of overnight travel and team bonding, but no standings points. A 5-2 loss in Yakima was followed by a competitive standoff in Spokane that saw WSFC eventually fall 1-0. The weekend was a chance for WestSound to face clubs in the middle of the table after playing mainly top-tier sides in the early season. Izzy Deluna and Graham Davidson both scored their second goals of the year in Yakima.
Now the team will get ready to host the Seattle Stars on Sunday June 8 at 4 PM in Silverdale Stadium.

The Hoppers scored five goals on Friday May 30 to reward their fans who had been waiting for the club to return from the road. Hector Valdovinos leads the way for YUFC with seven goals, top in the EPLWA. The atmosphere at the match was top-notch. The Hoppers have done a great job involving sponsors and the community. There was a soccer ball give-away, and fans were also given fresh apples as they left Marquette Stadium.
Up next the Hoppers will head north to play Bellingham United on June 8th.