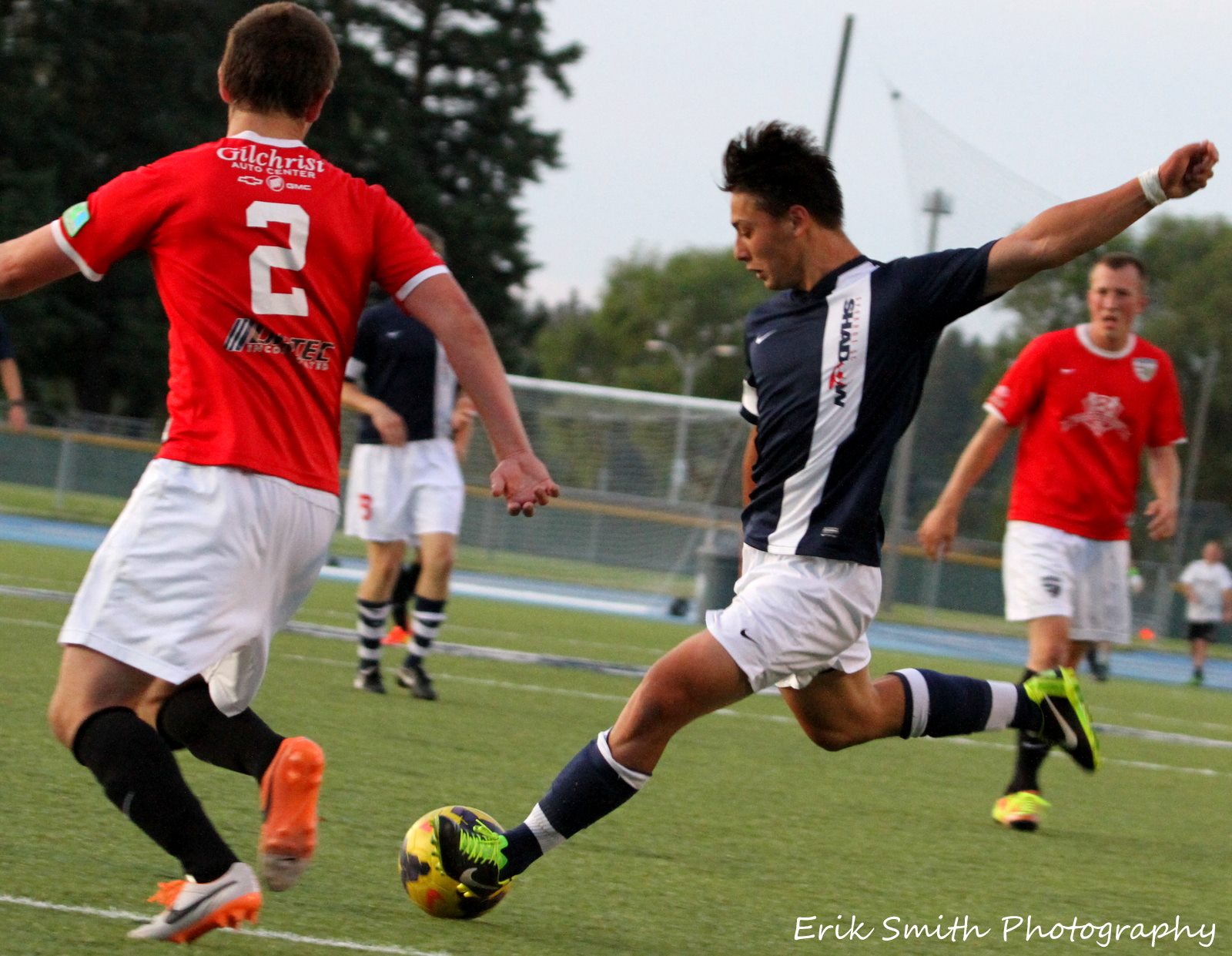 SPOKANE, WA —(Shadow release) The Spokane Shadow put their six-game unbeaten streak up against unbeaten South Sound Saturday night at Spokane Falls CC Stadium and a lengthy stalemate between the league’s top two defensive sides was finally broken in the 82nd minute courtesy of Graison Le. The late goal stood for the win and knocked the door wide open for the Evergreen Premier League title between Spokane, South Sound and Vancouver. 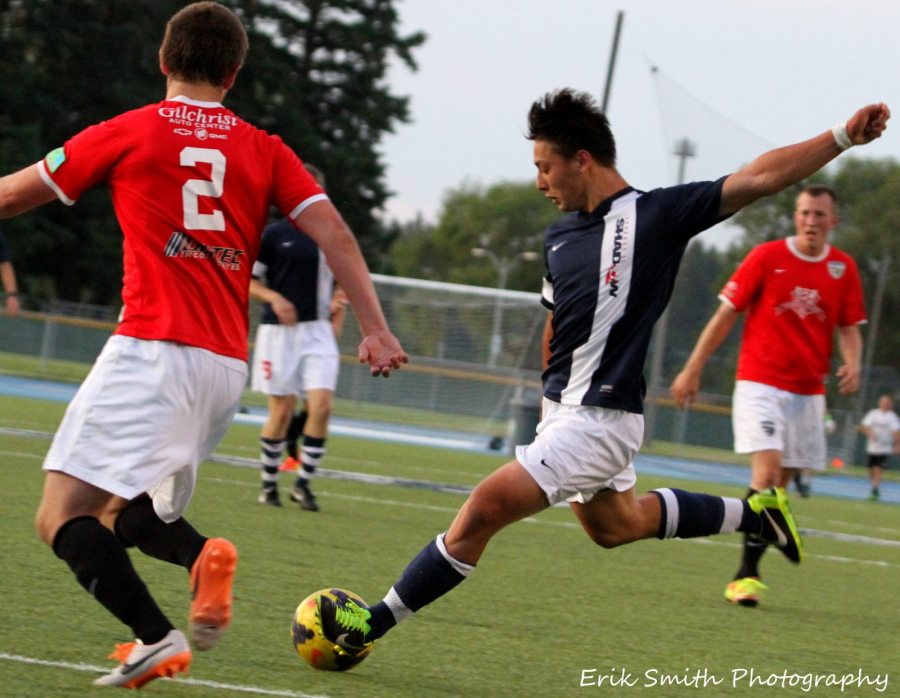 With eight minutes remaining, the ball was played from Pete Peterson about 45 yards out in to Timmy Mueller inside the middle of the penalty area. Mueller chested it down, but it came off a little hard and got away from him, going to the top of the box. A recovering South Sound defender narrowly beat Mueller to the ball, but the clearance went squarely out to the left side where Le collected the ball and beat the defender before slotting it inside the near left post past the visiting keeper Chris Kintz from 19 yards.

“This was an amazing team win, from our keeper all the way up to our forwards,” said Le after the game. “Our defense was locked down tonight – to hold off the number one team in the league to a shutout takes effort from everyone and it’s just an all-around great accomplishment.”

“I was just pretty blessed to get that goal and get us the win. I made a lot of runs at goal tonight and quite honestly should have put some of them away. But I didn’t give up and I really wanted a goal. I have been in a slump for a long time now so getting that goal was an amazing feeling. But in the end, I just feel blessed to have helped my team to another win… a great team effort.” 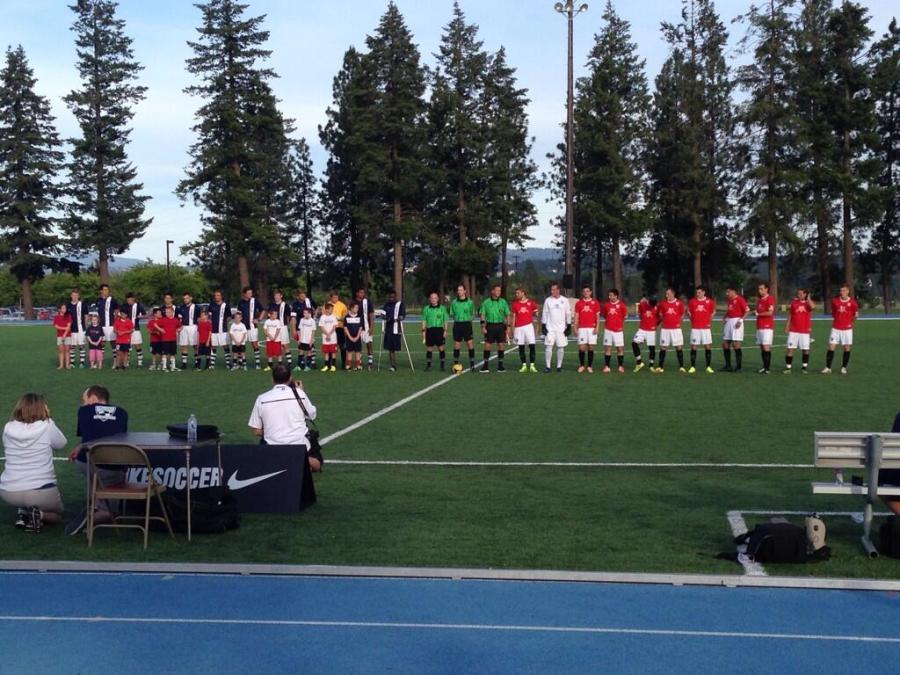 The Shadow, now riding a seven-game unbeaten streak, are 6-2-1 on the Evergreen Premier League campaign. The victory pulled Spokane even with South Sound (6-1-1), but the Vancouver Victory (7-3-0) were also winners Saturday with a 2-1 win at Yakima to leap into first-place, two points ahead of the Shadow and Shock.

“Happy for the guys – they played their tails off for the entire game,” said head coach Chad Brown. “They controlled what they could, and focused on getting the job done. South Sound are the best team we have played. I’m proud of the guys; however, it’s just another game – keep the highs low and the lows high. Good result, but its just another game.”

The Shadow had the better of possession on the night and limited the Shock’s chances primarily to set piece plays as they put a few scares into the crowd of 703 that were on hand on several corners and free kicks along with a few efforts from distance.

Spokane, however, continually threatened inside the penalty area with Le and Mike Ramos making several dangerous runs into the box. The chances came early with Le, in the fourth minute, dribbling along the left side of the endline toward the goal before it was cleared away as he approached the six. 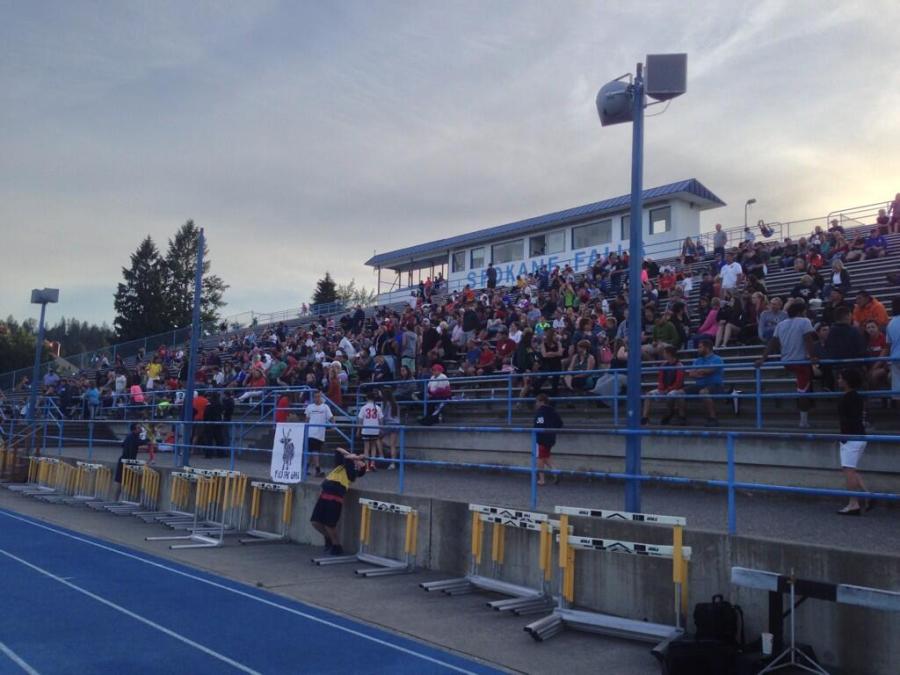 South Sound had a series of chances in the first quarter-hour, the first two courtesy of their second-leading scorer Daniel Gray. The midfielder fired a free kick from 23 yards out on the right side into the top of the six to Miguel Angeles in the 10th minute, but the header flew over the crossbar. Two minutes later Gray launched a corner kick from the right that sliced through numerous players in the area before being cleared and in the 15th minute Taylor Jackson served a ball from the right flank that nearly resulted in an own goal as it glanced off the head of Shadow defender Aaron Jeffery and narrowly slipped past the far post.

Then the Shadow had the bulk of the activity. In the 18th minute Peterson sent a free kick from the left flank that was lightly knocked out of the area and fell to Jeffery, but the effort from 20 was over the goal.

The Shadow defense suffered a blow in the 32nd when Andrew Newman challenged for the ball and exited with an ankle injury when he and a Shock player connected with the ball from opposite sides at the same time. Derek Zimmerman came into the contest, however, and the Shadow stood firm for their league-leading fourth shutout of the campaign.

“I thought the guys did a really good job limiting their chances and were really solid all day, starting with the forwards and going back to the back line,” said Andrew Glaeser, who picked up his second successive shutout. “I don’t think they had an obvious scoring opportunity, which is a huge credit to the effort of our team. It was a great team win.”

Shortly after the change, Spokane had a series of chances. A minute later a corner went through the box and found its way to Sam Engle on the far side, but he was not able to put enough on it to beat Kintz from eight yards. In the 34th a 10-yard effort from Le went for naught and a minute later recent entry Mueller created a turnover 45 yards out from goal and drove to goal only to be denied by Kintz at the edge of the area.

Both teams exchanged late chances in the first half before going to the break scoreless. The chances did not come quite as often in the second half, but they were still quite entertaining. In the 53rd minute Spokane’s Colin Shockman went on a square run across the area before unleashing a shot from 17 yards only to have it blocked by a defender.

Five minutes later South Sound’s Derek Johnson fired a low cross through the six from the left side but nobody was there for the finish.

At the hour mark Mueller sent a shot over the bar from 20 yards and a minute later Le just missed the mark high from about 32 yards out.

Seconds later Johnson drove into the left side of the area for the Shock, but his effort from about 13 yards looked to be headed just outside the post before Glaeser parried it away to be safe. South Sound also had another dangerous corner from Gray in the 73rd come up empty.

Both teams had late chances with South Sound scrambling for the equalizer and the Shadow looking to add some insurance, but Le’s fantastic finish stood for the victory. 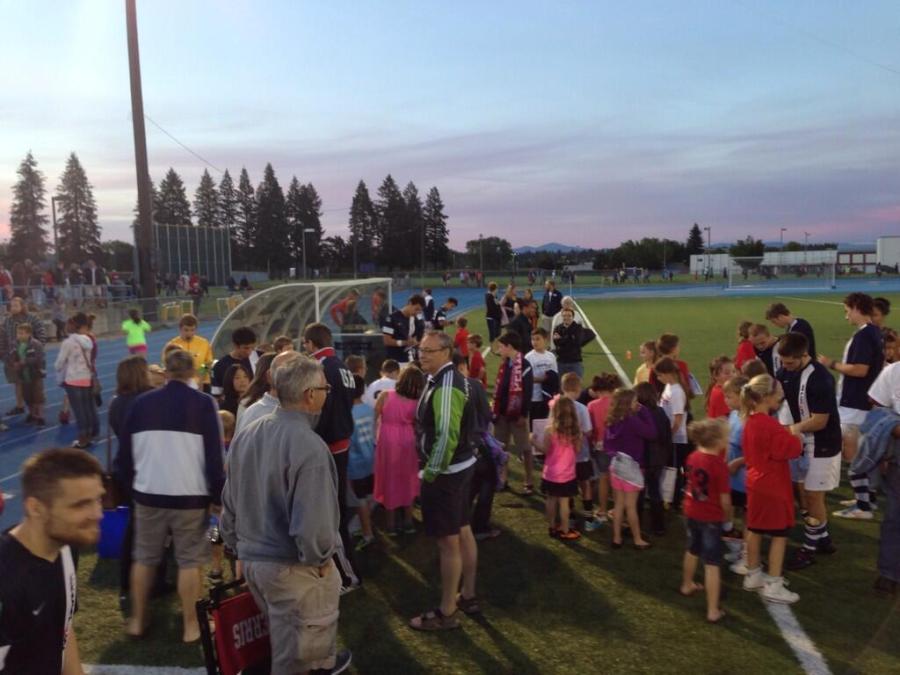 Coming Up – Shadow host Vancouver Sunday, July 6 @ 2:00
The Shadow are idle next weekend, but then face a tough three-game stretch. The host new league-leader Vancouver on Sunday, July 6 at Spokane Falls CC at 2:00 pm with kids from area soccer clubs wearing their team jerseys getting in free. They then have a quick turnaround with a return trip to Vancouver the next Thursday followed by a stop in Yakima the next night to wrap up their road slate for the season.

Serving as the honorary captain for the Spokane Shadow Saturday night was Henry Sunday, who plays for the US National Team headed to the Amputee World Cup this fall. A student of SFCC in the orthotics and prosthetics program, the midfielder plays in the American Amputee Soccer League, which often travels the country to hold clinics with the Wounded Warriors program. Full story in the Spokesman-Review [+]

Help Henry Make it to Mexico – In order for the team to play in the World Cup, each member of the team needs to raise $8,000 for the trip. You can help Henry by making a donation at: http://www.gofundme.com/72v5jc