SILVERDALE, WA — Colin Ralston had been knocking on the door most of the season. Finally it opened on Saturday as the WestSound youth product scored three times to lead his club to a season finale 4-2 win over Wenatchee.

The match was played in humid 90-degree heat. Further altering the atmosphere was the closing of the main covered stand due to maintenance. Fans had a choice: sit in the stifling sun, or find shade around a fence beneath some trees. Many chose the shade, a few others grabbed umbrellas for shade in the metal bleachers.

Twelve minutes later Wenatchee United drew level. A free kick was awarded a few yards beyond the penalty box. Adrian Espinoza stepped up to take it and delivered a shot that lofted over the WestSound wall and past goalkeeper Jordan Hadden. (See photo sequence). It was 1-1 in the 21st minute. 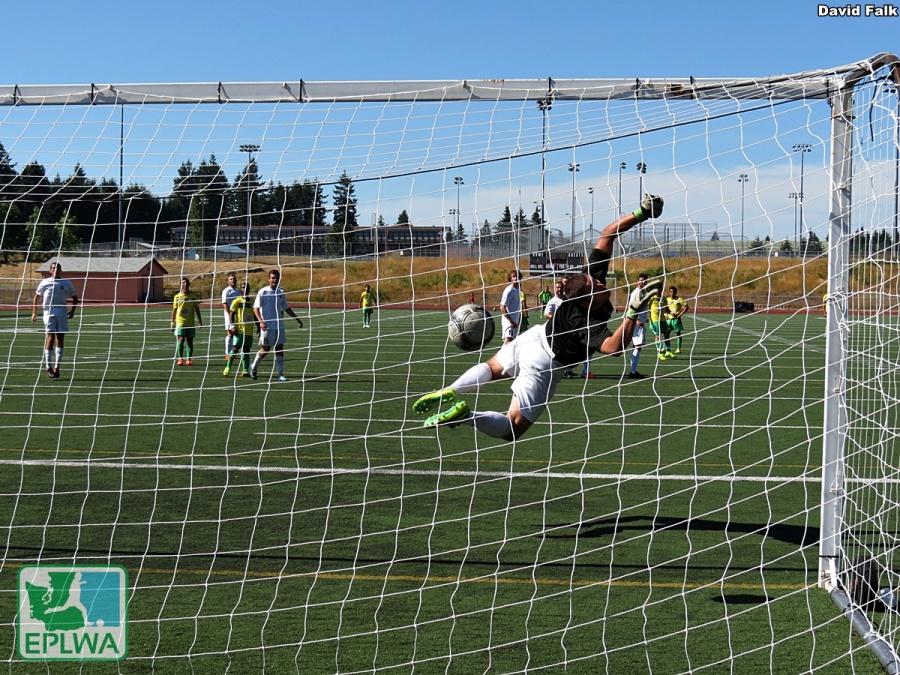 The visiting Wenatchee side took the lead in the 45th minute when Eleazar Galvan got his seventh goal of the season. His shot from the left side hit off of a WestSound defender and settled into the back of the net.

The first half saw one official stoppage of play for a water break. Players were instructed to stay on the field and water was tossed their way as the clock continued to run.

WestSound rallied in the second half as Ralston continued to shine and they got a free kick goal of their own.

Kevin Skinner provided the assist for a Ralston goal in the 63rd minute as the match drew even 2-2.

WestSound FC took the lead in the 70th when Graham Davidson planted a perfect free kick shot to the right of Wenatchee goalkeeper Colin Benham-Marin. It was 3-2 home side.

Colin Ralston reacted in stunned amazement after he completed his hat trick in the 72nd minute. He stayed with a play that saw his first shot hit the left post and then kindly bounce right back to his feet. He calmly shot the rebound in to make the score 4-2 WestSound.

The Silverdale gang’s season (3-10-1) is now complete and they were happy to end it with a victory. Wenatchee United (5-8-0) has one more match to play, next Sunday in Spokane.