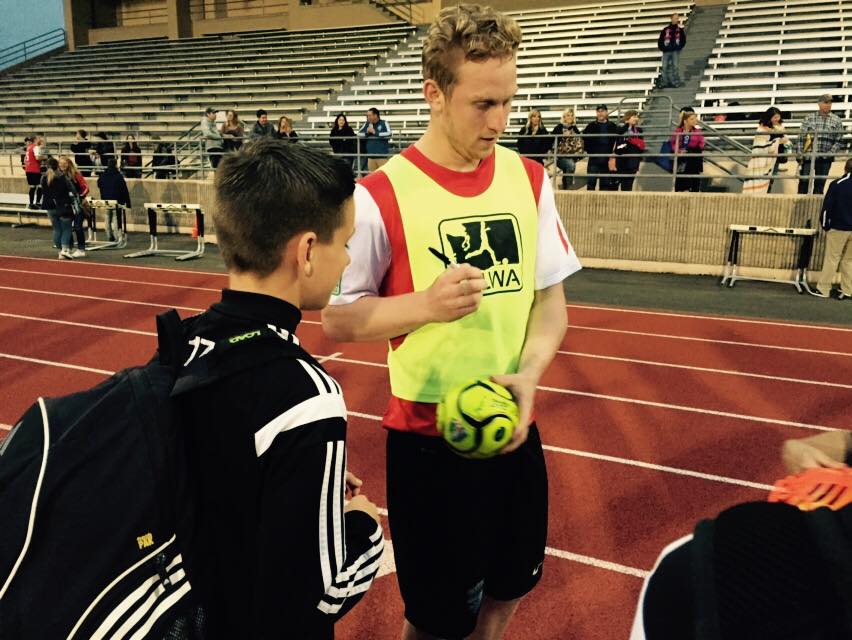 The Memorial Day weekend kicked off with a boom as two clubs posted milestones. For the Olympic Force it was their first-ever win in the Evergreen Premier League. For the South Sound Shock it was a record goal output.

MARYSVILLE, WA—Quil Ceda Stadium will always hold a special significance for the Olympic Force (1-3-0, 3 points). Saturday afternoon May 23 it was the site of their first win as an EPLWA side. The Bremerton bunch held on to beat Seatte Stars FC 2-1.

It was 2-0 at the half after the Force got goals from Colin Ralston in the 36th minute and Miles Nilsen in the 40th. Ralston’s was his second on the season. Meanwhile Spencer Miele in goal and the Olympic defense were making life difficult for the home Stars.

Seattle (2-2-1, 7 points) drew close in the 60th minute when Alexis Mardari scored his second goal of the season.

The Stars tried to get even. They mounted a series of attacks and second-half corner kicks, but the Force were able to hang on for the win.

LAKEWOOD, WA— The South Sound Shock (4-0-1, 13 points) finally played their home opener after starting the season with four straight away matches. It was a back-and-forth battle early on with the visiting Capitals of Wenatchee (2-3-0, 6 points.) The second half saw the home side explode for five goals and make it a rout. (SSFC match report.)

The Shock scored just 20 seconds into the contest on a follow-up shot by Scott Hanson that stunned Wenatchee FC.

Eleazar Galvan scored twice for Wenatchee in the opening 19 minutes and they led the match 2-1. He now leads the league with five goals.

However South Sound would rally before the half. JJ Schmeck made it 2-2 in the 23rd and then he assisted as Jay Hardy put the Shock up 3-2 in the 28th.

In the second half the Shock got a hat trick from Vince McCluskey to put the match away. He scored goals in the 57th (4-2), 60th (5-2) and 69th (6-2). The Tacoma club wasn’t done scoring, though. They added goals by Brandon Madsen and a second from Jay Hardy to complete the romp. It was Wenatchee’s second 8-2 loss on the young season (Spokane). In both matches the Capitals trailed just 3-2 at the half before falling apart in the second.