A hot and sunny weekend was met with hot soccer and a heated race for the top of the EPLWA table June 6 and 7. Vancouver Victory remain a perfect 7-0-0 after their latest win. V2FC are not yet running away with things though. A point for South Sound and four points for Spokane mean the chase is still very much on.

The Shock (5-0-2, 17 points) and Shadow (3-1-2, 11 points) finished just one point apart in 2014 with Spokane taking the EPLWA championship 32 points to 31. This was a highly anticipated match as the two clubs met for the first time in 2015. In the end a record was set. It was the first time ever that an EPLWA match ended 0-0 (nil-nil). The league had seen an amazing streak of 79 previous contests where someone scored. It’s not that both sides didn’t have some chances. The Shock had more of them, but the Shadow had the last good one in the very late stages. It required South Sound goalkeeper Chris Kintz (now with 3 shut outs) to make a crucial save that then tipped off of the crossbar. Read a Shock match report here.

The Force (2-6-0, 6 points) got their first-ever home win in league play as they bolted out early and then maintained their pace in a four-goal win over the Hoppers (3-4-1, 10 points.) Yakima conceded an own goal just six minutes into the match. Olympic then added another, from Diego Aceves, and it was 2-0 after just nine minutes of play. Kyle Schoales made it 3-0 Force in the 44th minute. Jesse Esquivel got Yakima on the scoreboard with a penalty kick conversion in the 67th. The Force answered back with goals from Miles Nilsen (78th minute) and Connor MacMillan (89th) to avenge an early 6-5 loss to YUFC in Yakima.

The hottest team in the EPLWA got even hotter as V2FC (7-0-0, 21 points) scored a six-pack to romp past Seattle (2-4-1, 7 points) at Goddard Stadium in Everett. It was a showcase match for Vancouver forwards Borce Atanasov and Timur Zhividze. They were two of six different goal scorers for the table leaders. Beyond that, they combined for five assists. Onlookers described them as “unstoppable.” It did take until the 22nd minute for Vancouver to begin their outburst. Nate Cheney got his second goal of the season off an assist from Timur Zhividze. Timur got his sixth goal of the year next, off the first assist from Atanasov, in the 31st. Borce’s second assist came just five minutes later when Alex Segovia got his fourth goal of the season in the 36th minute. The rout was on in the 41st when V2FC made it 4-0 when Atanasov got his goal thanks to a croner kick from Danny Segovia. In the 62nd minute the Stars got one back as Bastien Catrin converted a penalty kick. The Victory then added on two more to run away. Ben Culpan scored his first goal in the 80th (Atanasov’s third assist of the match) and Ian Farley got his third of the year in the 90th (second assist of the match for Zhividze.) V2FC Match Report Here.

The first EPLWA match to ever kick off in the morning was held at Gordon Field in Bremerton. It was still 70 degrees at match time thanks to the weekend heat wave. Spokane (3-1-2, 11 points) and Olympic (2-6-0, 6 points) had both played the day before, but it was still a very active, physical match. The Shadow remain unbeaten all time in away matches as their amazing away form continues in 2015. In ten matches away from Spokane Falls CC the Shadow are now 8-0-2. The first goal came in the 25th minute as Karl Muelheim put Spokane up 1-0. It was 2-0 in the 35th when a pinball scramble in the box saw a tall bounce end up on the head of Chance Bukoski. He looped his header all the way across the goal mouth and into the far side. Spokane put the result to rest on Anthony Mota’s goal in the 83rd minute. 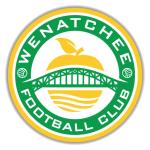 Nick Cashmere gave the Hammers (0-7-0, 0 points) an early second-minute lead in 100+ degree heat in Wenatchee. The 1-0 advantage lasted for Bellingham until the latter stages of the match. As the temperature slightly cooled, Wenatchee FC’s (4-4-0, 12 points) offense heated up. They got two goals from league leading scorer Eleazar Galvan (70th and 89th minutes) and another from Luis Garcia (84th minute, match winner) to take control of the match.