BREMERTON, WA— Tyler Bjork scored two goals and assisted on a third as the Seattle Stars and Olympic Force battled to a 3-3 draw last Saturday afternoon at Gordon Field. The Force got a late goal to salvage a home point.

Jeff Halstead shot the match for goalWA.net and has a gallery at Facebook.com/goalWA.

Four of the six goals in the match were scored in a frantic first half. Tyler Bjork got his first goal after just five minutes on an unassisted strike that put the Stars up 1-0. The Force drew level in the 17th minute when Diego Aceves converted a pass from Miles Nilsen to make it 1-1.

Five minutes later the Force took their only lead of the match when Aceves turned in an assist on a goal from Kyle Johnson to make in 2-1 Olympic in the 22nd minute.

Olympic’s lead lasted ten minuted before Seattle was able to get level. It was Bjork with his second strike of the contest on an assist from Henry Pappin in the 32nd minute that made it 2-2. Bjork now has 4 goals this season and increases his all-time EPLWA lead in goals with 24.

The Stars looked like they might get their first win of the season when they took the lead 3-2 in the 61st minute. This time Bjork was credited with the assist as Juan Maldonado restored the visitor’s advantage. 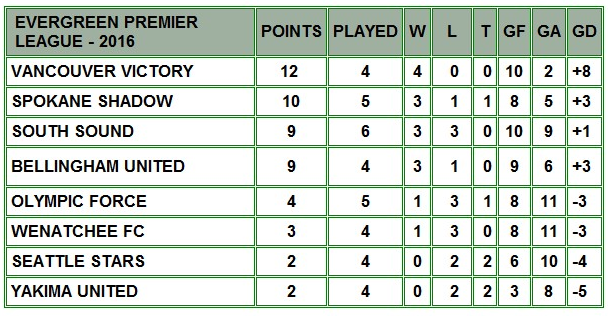 Seattle held the lead all the way until the 88th minute. Olympic rescued a home point when Raul De Luna assisted on a strike from Ishmael (Izzy) De Luna. It was a case of a nephew providing the way for his uncle. The North Kitsap High grads are also family.