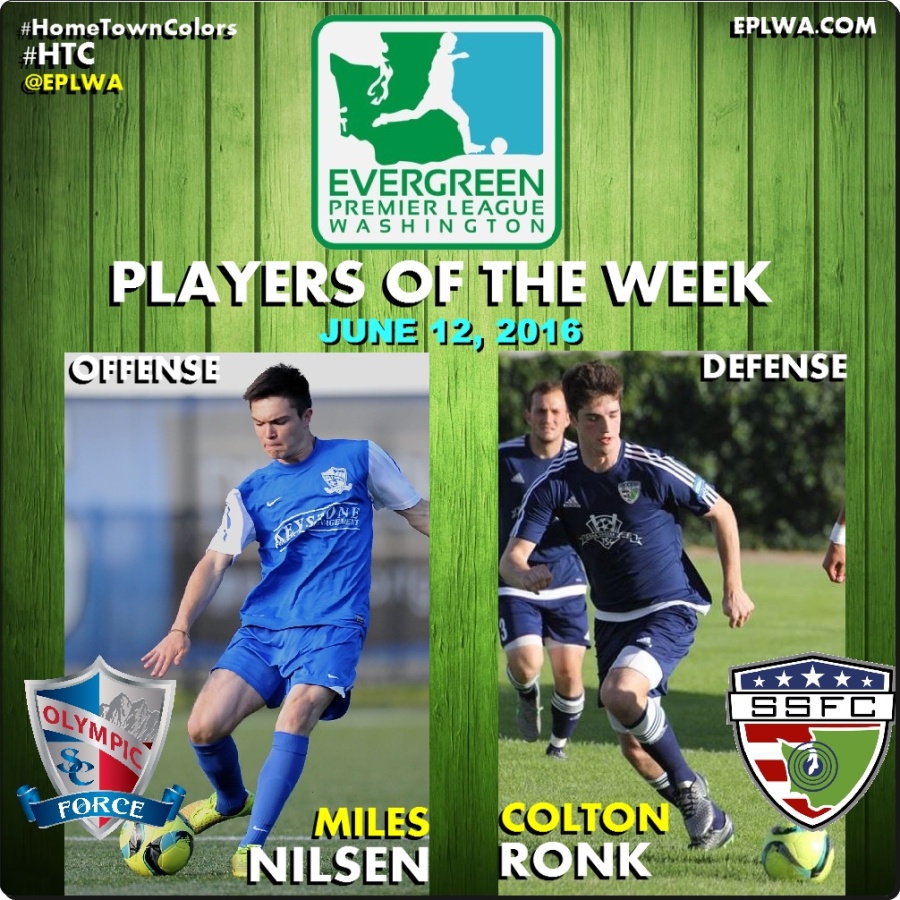 BELLINGHAM, WA — The Evergreen Premier League announces that Miles Nilsen of the Olympic Force and Colton Ronk of the South Sound Shock are this week’s EPLWA Rock’em Socks Players of the Week. They will receive special league logo socks to commemorate their accomplishment.

Miles Nilsen scored two goals and assisted on three others as the Olympic Force scored a club-record 6 goals in league play in a 6-2 rout of Bellingham United on Saturday night June 11 at Gordon Field in Bremerton.

“Not only was Miles due to have a game like that, but his dad was visiting from Arizona,” says Force General Manager Micah McMonagle. “The game was a book and not only did he write nearly every page, but he was the book ends as well. With the goal at the beginning and then beating four guys at the end before getting pulled to the ground to prevent him from getting a hat trick, he still managed the poise to play a perfect ball for Schoales to blast home. A hat trick in assists instead. A complete performance.”

Force Head Coach Steve Cashmore was equally impressed. “A great performance. Miles had a hand in (nearly) every goal. He’s been weathering a foot injury for a few weeks but still covered a lot of ground, driving the team. Especially getting the assist on the last goal, filling in at centerback and making an 80 yard solo run at the end of a game. Just a great performance.”

Colton Ronk is a guy that South Sound Head Coach Adam Becker has come to rely on this season. Becker singles out his hard work and his consistent ability to win the ball one on one. Saturday night in Yakima Ronk helped hold his line together and eventually the SHock got a late goal to win, 2-1.

“Colton was a big part of our success Saturday vs. Yakima. He is solid and persistent week to week,” says Becker. “You get the same level of play always with Colton which seems to be effortless. He was able to not only take away goal scoring chances but created several goal scoring opportunities for us by either playing smart balls out of the back or by drawing fouls higher up the field for set pieces.”