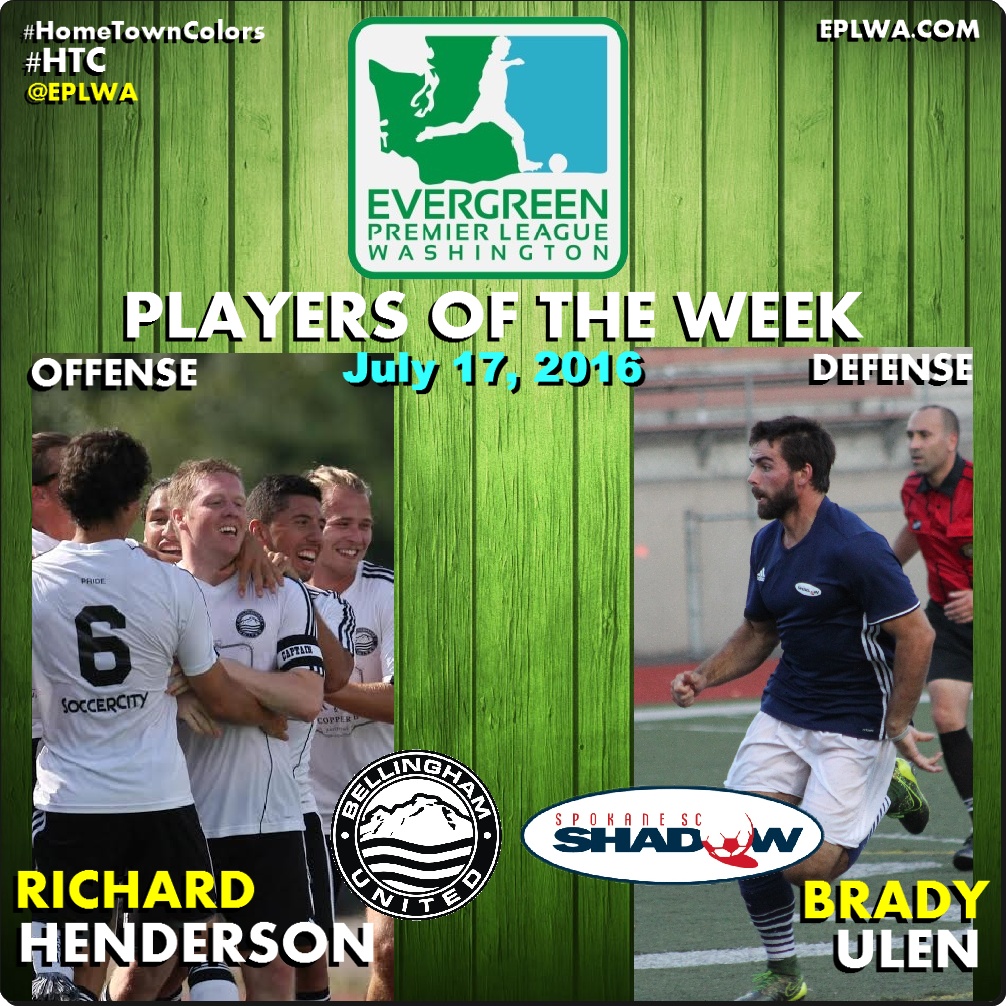 BELLINGHAM, WA—The Spokane Shadow extended away their unbeaten streak to 18 matches (2014-2016) on July 16 with a 1-0 win at Seattle Stars FC. The next day in Bellingham that amazing accomplishment ended when Bellingham United took a 2-1 win. Players on both teams, and both sides of the ball, are honored this week as Evergreen Premier League Players of the Week. 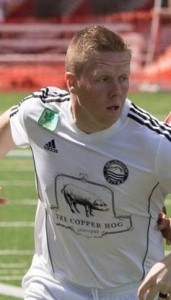 Bellingham United and the 2-time defending EPLWA champion Spokane Shadow both made history last weekend. The Shadow extended their unbeaten away streak to 18 matches and then Richard Henderson and the Hammers stopped it right there.

“You can see why Spokane have been undefeated for so long on the road as they are well drilled and battle until the very end,” says Richard Hernderson, who is the EPLWA Offensive Player of the Week for his goal that put Bellingham United up 2-0 in an eventual 2-1 win over Spokane on Sunday at Civic Stadium.

“The game opened up in the last 20 minutes and we were able to create chances on the counter,” notes Richard. “Typically I’m the one crossing the ball but I was filling in as center forward and Thiago (Novis) whipped a great ball in and I managed to time my run where I could get above their defenders and head in for the winner. It was great feeling not only to score the winner but to end Spokane’s magnificent run and keep us in the title race.”

Tyler Bjork leads the Evergreen Premier League this season with 11 goals. If anyone might score against Spokane and perhaps stop their away streak, you’d suppose it would be Bjork.

That’s where EPLWA Defensive Player of the Week Brady Ulen comes in. He was tasked with marking Tyler.

90 minutes later Spokane’s unbeaten away streak was increased to 18 matches after a 1-0 win at French Field in Kent. Ulen (and his defense) had shut down the league’s all-time leading scorer.

“Any individual recognition typically comes from a team’s willingness to do the right things consistently,” says Spokane Shadow Head Coach Chad Brown. “Brady was a key part of the team’s efforts of doing the right things on Saturday versus a quality and improved Seattle Stars team.”

Ulen was also named Defensive Player of the week in 2015.

“The Shadow run of away form over three seasons is nothing short of outstanding,” says EPLWA Commissioner Peter Ostrovsky. “Brady has been a big part of that streak, and also of lengthening it to 18 matches. We congratulate his performance and also the Shadow’s accomplishment, which will likely never be equaled in our league.”