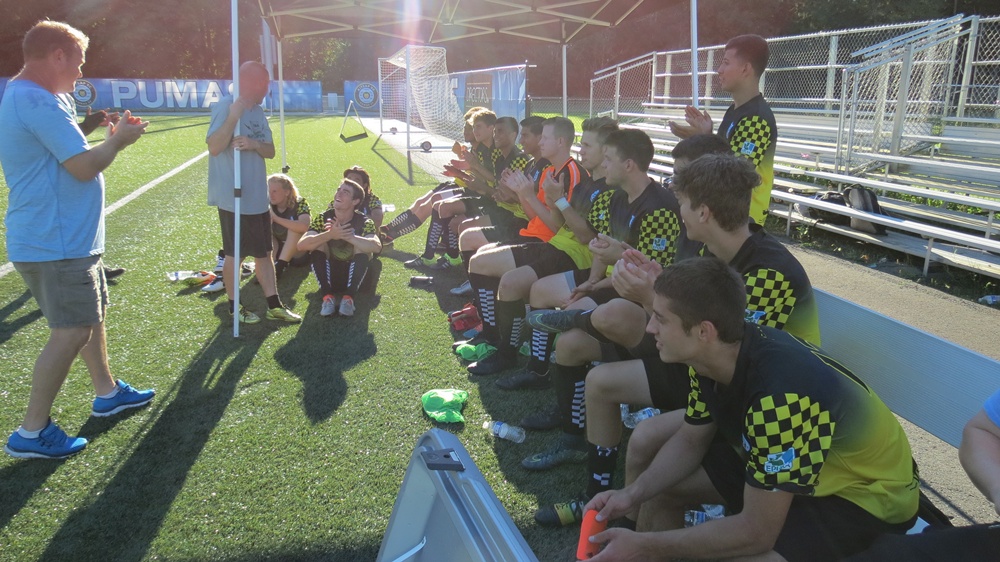 Evergreen Premier League President Peter Ostrovsky had to be out of state for work and so it was decided that I would be the league representative on hand to present the EPLWA Trophy if it was clinched last weekend. This meant taking the train to Vancouver to be there for the Saturday July 23 match between V2FC and the Spokane Shadow. 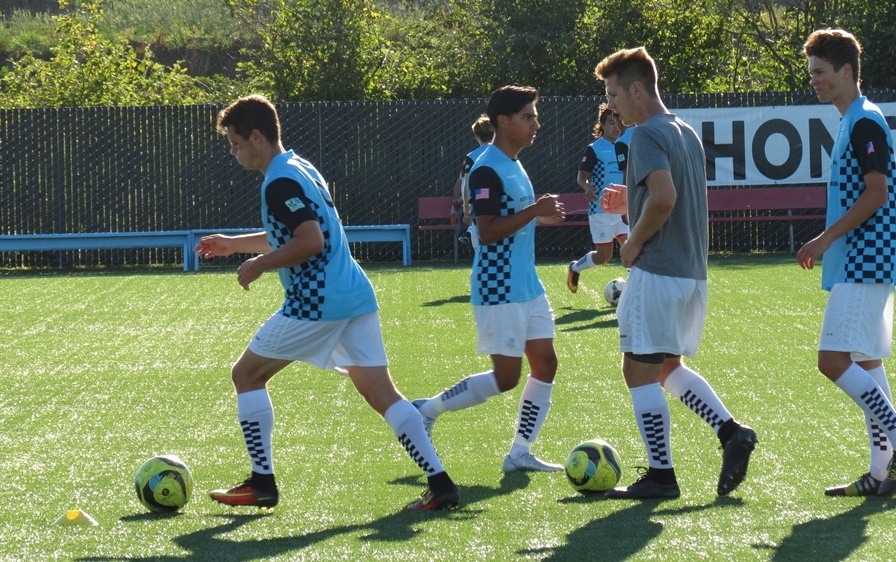 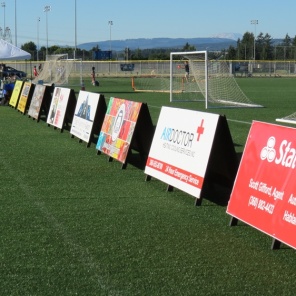 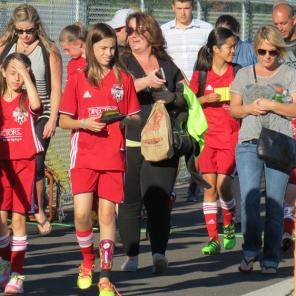 The Victory were more than gracious hosts right from the start. Owner and General Manager Barrett Goddard took this opportunity to thank me for the work I do with the league by taking me to a Timbers-LA Galaxy match, paying for all my food on the visit – and putting me up in a local hotel!

The Goddard Family were all very excited ahead of Saturday’s match, as you can imagine. Barrett’s sister and mother came down from Seattle. His sons Nathan and Cameron were busy helping at the match, as was his wife Sylvia and a small army of friends.

I got to Harmony Sports Complex about 40 minutes before kick off and players from both sides were just taking the pitch for warmups. The Victory moved here this season to help Washington Premier FC youth club gain momentum for building a 1000-seat soccer venue. Barrett showed me around and also pointed out the place a stadium could go – just on the other side of the current pitch they use. 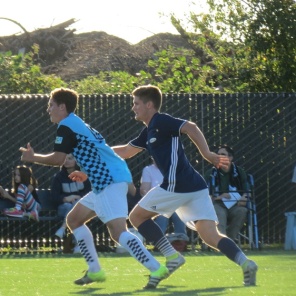 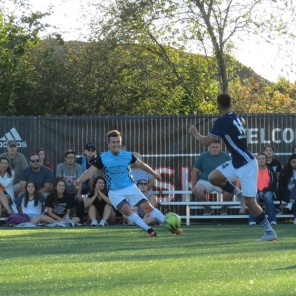 The match was a barn-burner to say the least. Spokane went up, then the Victory got level. Then the Shadow went up again – and after a long string of possession the Victory got level on a dynamic header from one of their leaders, Christo Michaelson. The crowd of 442 was happy at 2-2 and felt this might be a trophy night.

See a great gallery of photos from V2FC-Spokane here!

On the sidelines I had been getting updates about what was happening in Yakima. The Hoppers were hosting Bellingham United 1/2 hour earlier. If the Hammers lost or drew, I knew I’d be presenting the trophy on Saturday. The score came in – it was 2-0 for Bellingham in the late going.

Just then – the match unraveled for Vancouver. Marco Gonzalez had been having a tough night in goal for V2FC. Spokane’s first two goals were headers that he couldn’t reach. Now the ultimate nightmare for him – he had lost the ball after a save, then tripped the Spokane player in front of an open goal. Marco was red-carded and not only were the Victory going to be reduced to ten men, they were likely to be behind. And so it was, and the valiant Shadow rode the hat trick of Fernando Alvarez (who easily converted the PK) to a 3-2 win that showcased bravery, heartbreak, pulsing action…pretty much everything that the EPLWA has to offer. But no trophy. The two-time defending champion Spokane Shadow would simply not allow it. The hardware remained packed and traveled up I-5 the next morning.

The Victory were downbeat after suffering their first loss of the season. A handful of players had gone over to Barrett Goddard after the match and apoligized to him for not winning the trophy at home. Barrett told them they had no reason to apologize. Spokane is a great team and it was a battle.

Traffic was terrible on I-5 the next day. I was in a seperate car from the V2FC players (they took two vans) but all of us exited at Olympia and took 101 up to Highway 3 and the back roads to Bremerton.

The same routine would be repeated at Gordon Field. Vancouver would take the pitch 1/2 hour after Bellingham United would do the same in Tacoma against South Sound FC. The Victory wore their new yellow 3rd kit for just the second time. It was sunny and warm. The opponent Olympic Force had nothing to lose. That is often danderous. 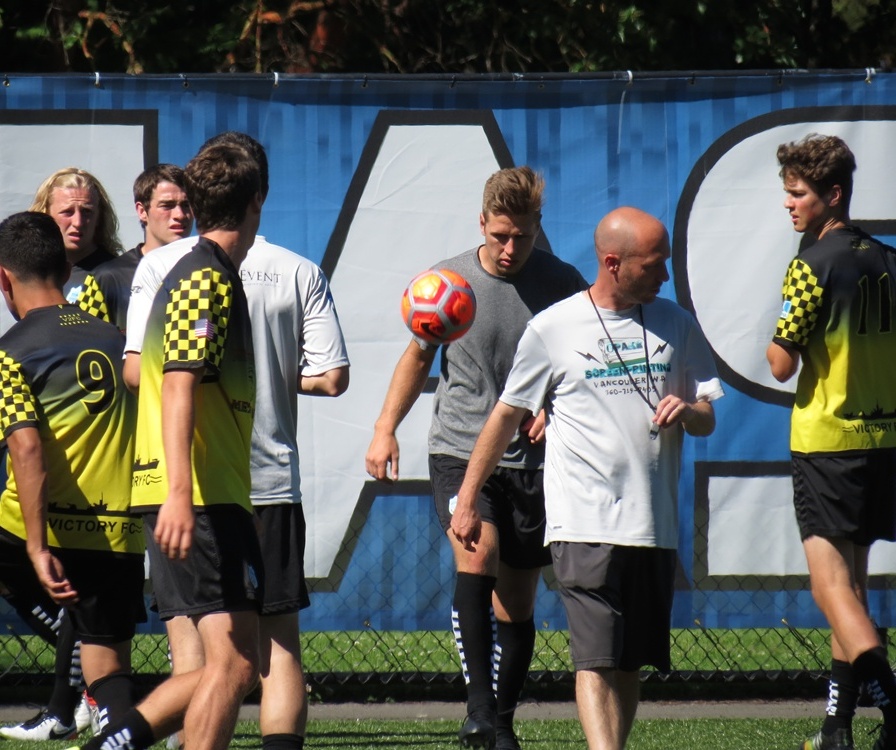 Bellingham bounced back right away with goals from Kurtis Pederson and Reno Caro. It was 2-1 United at the same time V2FC was struggling to put away the Force. Then Christo rose for his second dramatic header of the weekend and it was 2-0 for Vancouver.

In Tacoma, the Shock had rallied to tie the match 2-2 on a goal from Danny Minniti. Some on the Vancouver bench were multitasking now, trying to follow twitter while also pushing on their boys in yellow and black.

Olympic Force GM Micah McMonagle made the announcement while I was seeking shade in the press box. “Ladies and Gentleman, a final score this afternoon in the EPLWA. South Sound-3, Bellingham United-2.” Across the way Vancouver players applauded and seemed genuinely relieved. V2FC would indeed get a trophy on the day.

Cody Crook’s late strike (80th minute) meant that the Hammers had lost their thin chance. It also insured that Vancouver would become the first EPLWA club to clinch the title after 12 matches played. Spokane had done it in 14 and 13 in 2014 and 2015.

The Victory were awarded a penalty kick and Christo was chosen to take it. The blond bomber made it 3-0. With multiple stages producing drama, Vancouver lost focus a bit, and Olympic stepped up gladly to make this one quite a contest. Bryan Weathington and Izzy Deluna brought the Force back to within 3-2. They had chances to get level, but the final whistle came before they could. 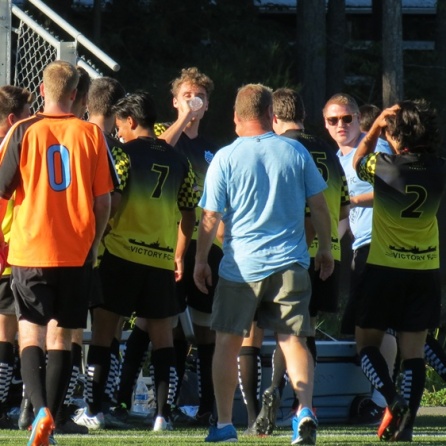 Then came that special moment when clubs get rewarded for great seasons. I had been embedded with the Victory over 33 hours straight and could now do what President Peter Ostrovsky had summoned me to do – oversee medals, scarves and a trophy.

The Victory players were genuinely excited to win the league for Barrett, for Head Coach Aaron Lewis, and for themselves. They loved the EPLWA 2016 league scarves from Ruffneck Scarves. They eagerly crowded to get their medals from Coach Lewis, Barrett or Cameron Goddard. They hoisted the trophy as our cameras zoomed in on the experience.

Most of the guys wanted photos so I used my camera and plenty of different cell phones. Before long photos were in social media and word was getting out to friends and families down south.

Vancouver finished third in both 2014 and 2015. Now they had gotten the job all the way done. A club that dared to dream by calling themselves “Victory” had backed it up. 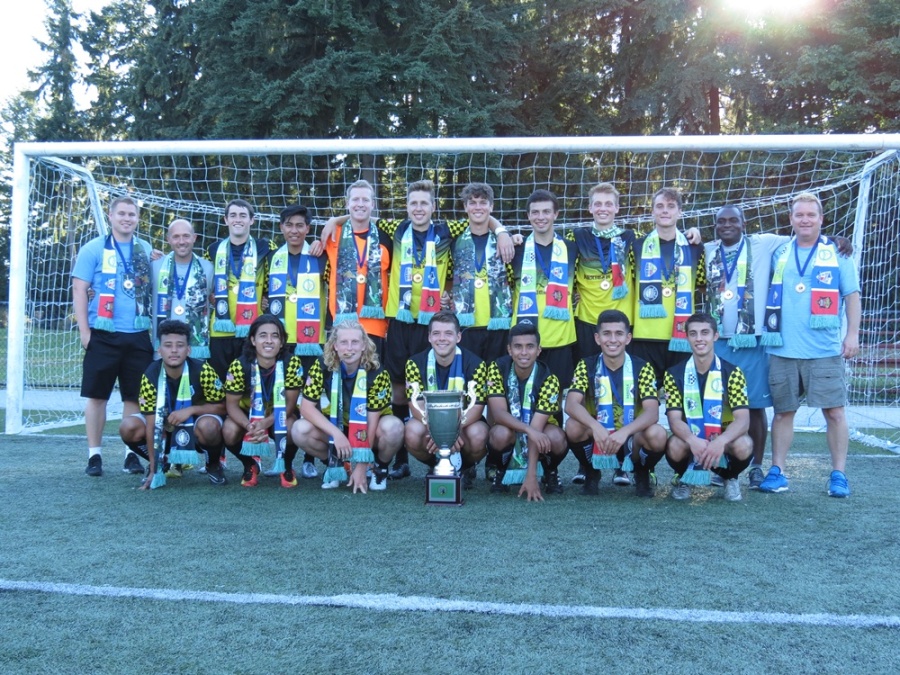 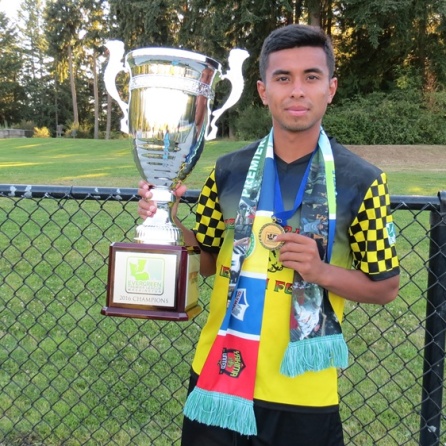 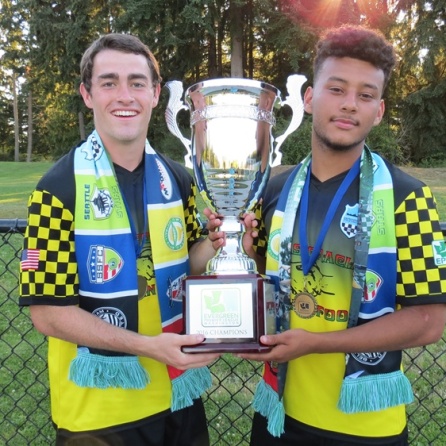 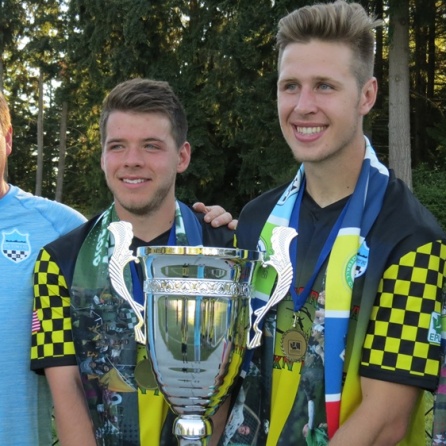