In an intense back-and-forth battle between the Cascade and Rainier Conference champions, Alex Whiting broke a scoreless tie in the 90th minute to lead Washington Premier to their second straight Evergreen Premier League championship with a 1-0 win over Bellingham United on Sunday evening in Puyallup.

In a game featuring two teams that combined to scored 52 goals during the regular season, Washington Premier and Bellingham started off on the attack with two shots on goal in the first three minutes and a frenetic pace that hinted at a wild high scoring game. But WA Premier goalkeeper Mike Arguello and Bellingham keeper Hector Gutierrez were up to the challenge, making a couple of early saves that allowed their defenses to settle in and slow the pace down.

WA Premier’s best chance of the first half came in the 23rd minute when Eddie Na unleashed a hard knuckling shot from just outside the box that Gutierrez hot his hands on. Micah Wenzel came flying in and got his head on the rebound but Gutierrez had recovered and was in the perfect position to make the second save and preserve the scoreless tie.

The two teams traded shots over the final 15 minutes of the half including a shot by Bellingham’s Christian Rotter that was saved by Arguello in the 30th, a pass across the box by WA Premier’s Alex Whiting that just barely missed the foot of a sliding Brandon Madsen in the 40th, and then a great opportunity for the Hammers when Georg Cholewa slipped behind the defense but his shot went right into the chest of Arguello right before the final whistle of a scoreless first half.

Bellingham thought they had taken the lead in the 55th minute when a shot rattled off the bottom of the post and appeared to the Hammers to have crossed the goal line before WA Premier goalkeeper Carlos Rodriguez, a halftime sub for Arguello, gloved the loose ball. The referees disagreed and the score remained 0-0. 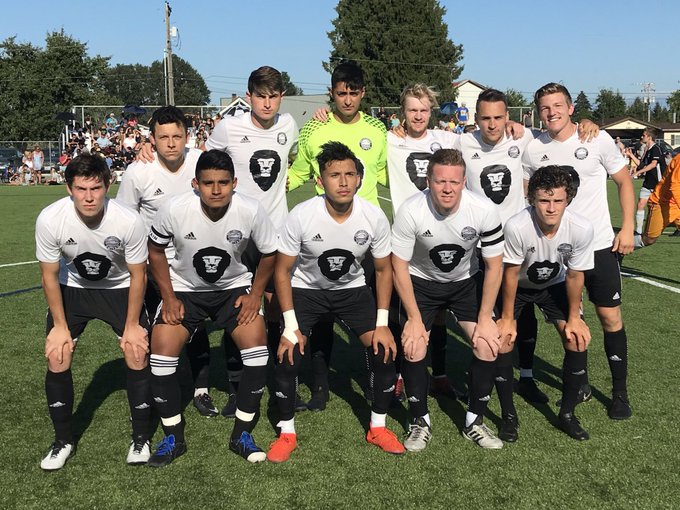 Both teams kept knocking on the door over the final 30 minutes but Bellingham’s top scorers Richard Henderson and Eleazar Galvan were kept away from goal by WA Premier defenders including Micah Wenzel, Logan Jones and Danny Minniti. On the other side, 2018 Golden Boot winner and WA Premier’s leading scorer, Brandon Madsen, was kept in check by Bellingham’s defense highlighted by Christian Caro, Camron Miller and Gus Diehl.

It took until the 90th minute to break the stalemate when an innocent, high looping ball floated into the box and came down awkwardly for Gutierrez. The ball bounced behind him where Whiting was waiting to pounce on it and score on the open goal giving WA Premier the 1-0 lead with just three minutes of stoppage time ahead of them.

Bellingham mounted a spirited attempt to comeback in stoppage time and appeared to have equalized when a scramble in the box led to a goal, but the player that poked the ball past Rodriguez was ruled to be offside and Washington Premier survived to repeat as champions with the 1-0 victory.

With Arguello and Rodriguez combining for the shutout, Washington Premier finished the season on a nine game winning streak in which they allowed just five goals and outscored their opponents 31-5.

Bellingham lost just their second game of the season, posting an 8-2-2 combined record in 2019. They made their first appearance in the championship game and finished second for the third time.