The Evergreen Premier League has completed its fourth week of play with all eight clubs in action. This week just 11 goals were scored but there were numerous saves, take-aways, tackles, moments of admirable teamwork and individual stand-out plays.

Two players are honored this week for their performances, which elevated them above the crowd and into the books as our Offensive and Defensive Players of the Week. Tyler Bjork (Bellingham United, Offense) and James Partee (Vancouver Victory FC, Defense) are this week’s choices. As a part of this recognition both will receive unique, custom EPLWA socks designed especially for the league by Rock’em Apparel. 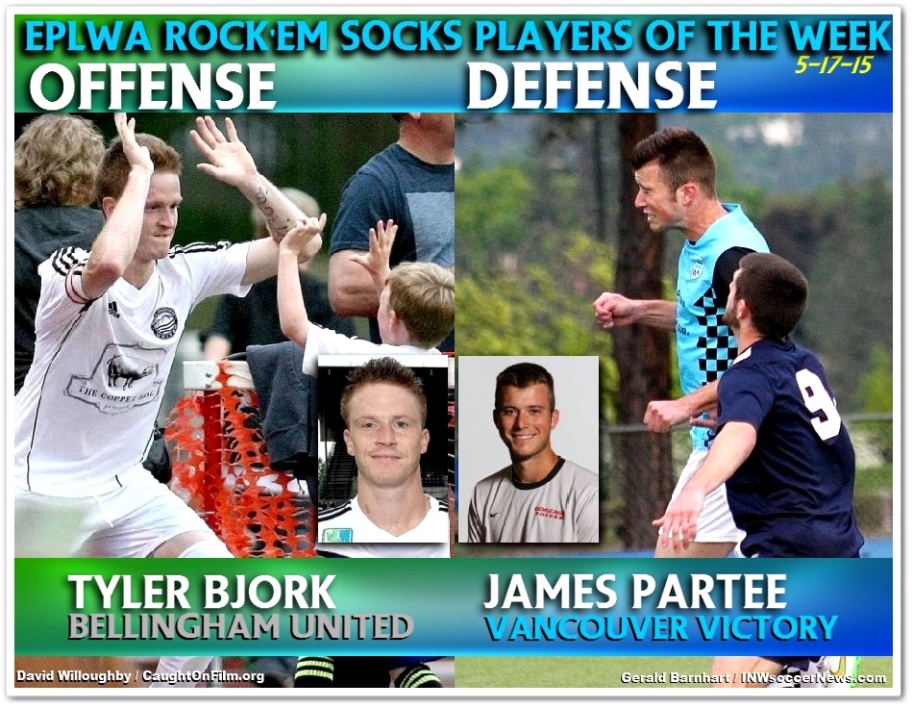 A nose for goal and a head for defense. This week’s honorees stood our for what they did in a week when the Evergreen Premier League season took a bit of a turn on the scoreboard. The four matches played combined for just eleven goals, making scores all-the-more precious and putting the spotlight on team defenses. In Tukwila last year’s EPLWA goalKING Tyler Bjork did his best to keep Bellingham United close to the Seattle Stars. In Spokane James Partee returned to the city he attended college in and organized Vancouver Victory FC’s history-making night as they became the first team to ever shut out the Spokane Shadow of the EPLWA.

OFFENSE: Tyler Bjork (forward) led the Evergreen Premier League in goals scored in 2014 with 13. He turned heads last season when he scored six goals in the first half for the Hammers in a home match against Yakima United.

On Saturday night at Starfire Stadium in Tukwila he staked his side to a 2-0 first half lead with a quality brace. “Tyler certainly was dangerous,” says Hammers head coach Lance Calloway. “He scored two great goals.” It was a week where goals were at a premium, and Bjork was the only player to score more than one. His first came in the 17th and was the result of nice interaction with fellow forward Nathan Reitz. His second gave Bellingham a 2-0 lead in the 37th and featured a long dead ball free kick from Sean Conner that Bjork found with his head and nodded home.The Hammers were getting a much-needed boost from Bjork. Tyler remained dangerous throughout the match, but the result turned and Seattle rallied for a 4-2 win.

Bjork commutes up to Hammers practice and matches. “The drive is just a drive,” he told the Bellingham Herald last season. “Enjoy the view and take it for what it is. It’s just a passion for playing that keeps me going.”

DEFENSE: James Partee (center back) becomes the second V2FC defender to be honored this season, and why not? The Victory have give up a league-low four goals over four matches. Saturday night at Spokane Falls Community College Stadium they did something that had yet to be accomplished – shut out the EPLWA Spokane Shadow.

“James set the tone early with effective communication and a couple of physical tackles,” says Vancouver head coach Aaron Lewis. “His ability to organize a complete team defensive effort with his teammates was no doubt a key to our success this weekend in Spokane.”

It was quite a night for the Vancouver native who played four high school seasons at Mountain View before joining the Gonzaga Bulldogs. It was a homecoming to his college town, but Partee was bleeding Victory blue.

“We got really great play from James in Spokane,” says Victory owner Barrett Goddard. “He was inspired to raise his game and the rest of the defense followed his lead and helped us to a big win.” Partee joins fellow V2Fc center back James Williamson on the 2015 POTW honor roll.

About the POTW Honors